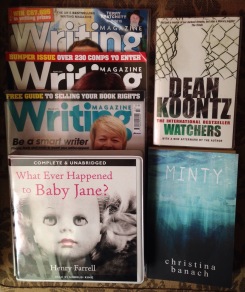 For someone who writes middle grade fiction and reads more children’s books than anything else, this week’s pool may come as a bit of a surprise.  At first glance there’s not a lot of ‘happy’ in this heap and certainly nothing for younger children.

I was really pleased to get three issues of Writing Magazine from the library.  They get it in every month and it is available to borrow but, as there is a Creative Writing group that meets in the library, the magazines are in high demand.  You can’t reserve magazines, so it’s a case of first come, first served.  It’s taken me until this week to get hold of the February, March and April editions.  I’m really chuffed to have got hold of the April copy so quickly.  I’m loathe to buy a subscription for something I can get for free but, by the time I see them, the competition deadlines have often passed.  Perhaps I could suggest it as a birthday present?

Whatever Happened to Baby Jane? by Henry Farrell is the story on which the famous film starring Bette Davis and Joan Crawford was based.  I kept hearing their voices in the dialogue, with occasional hints of Bette Midler.  It was creepy and atmospheric but I don’t know if I would had enjoyed it as much without the voices in my head.

I read Minty by Christina Banach for one of the book groups I’m a member of.  The premise was intriguing and the story had some really interesting themes and ideas – the death of a twin, what happens after death, an obsession with Roman history and mythology.  Unfortunately, I didn’t feel the structure of the book was quite right and so the story suffered.  I needed to know more about the twins and the Roman stuff at the beginning of the story, and I could have done with a lot less middle – but that’s probably just me.

The biggest surprise for me was Watchers by Dean Koontz.  This had been recommended by someone at our Sci-Fi book group, so I put in a request at the library.  I was a bit put off when I saw the spine label was for horror – not something I generally enjoy (although I do read Stephen King).  I ABSOLUTELY LOVE this book.  I’m adding it to my birthday wish list so I might be able to have my own copy and stroke it at regular intervals.  Yes, there are some very sad and lonely people; yes, there are murders; yes, there is a monstrous creature; yes, it gets very tense.  But there is love and friendship and happiness and hope and a heroic dog.  It’s the sort of book I want to go back and read again, especially the afterword by the author.  He sounds like a really decent bloke who I might like to share a beer with.