I handed in my dissertation last month so, with luck, I will be celebrating my graduation this time next year. Congratulations to Damon, Amelia, Jezz, Ele, Claire, Alex, Phoebe and everyone else who had their ceremony this week.

If you haven’t checked out Damon’s Unbound page yet, please do. I was privileged to read some early drafts of this work and can highly recommend it. I’ve signed up to support him and I hope you will, too.

Before Ten Little Astronauts was launched by Unbound – submarine promo video and all – it formed the bulk of my work for an MA in Creative and Critical Writing at the University of Winchester. The way the course was weighted, that one project was just about as important as every other module combined. On top of that, in a move that I can only assume was intended to keep postgrads up all night to finish the thing, that final project would dictate the upper limit on your results. You could hand in the greatest works of literature ever devised for the smaller modules, then still end up disappointed on results day if the big one didn’t measure up.

Well, on Friday I graduated with Distinction. 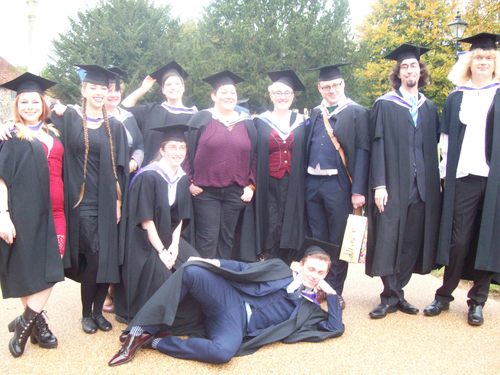 Second from right: me. Also pictured: some of the greatest writers I’ve ever met.

It’s been a long time since I actually got my…