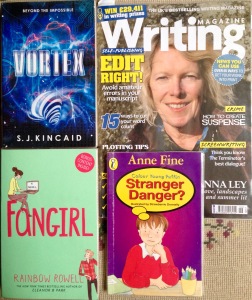 If you just look at the pictures, it doesn’t seem that I have done much reading this week, but that’s not the case.  I have finished two cracking YA novels, a beautiful version of a traditional tale, an early reader and a magazine about writing.  The latter always takes me off onto researches and explorations inspired by the articles and news features.  That takes up a lot of time!  I’ve also been reading profiles of people who were speaking at Wonderlands, a symposium organised by the Sussex Centre for Folklore, Fairy Tales and Fantasy that I attended this weekend.  I shall post more about that later in the week.

This week I have done something I thought I would never do.  I have given myself permission NOT to finish every book I start.  It has always been a matter of pride that, no matter how dull, annoying or frustrating, I always plough through to the very end.  There have only been one or two exceptions over the last fifty years.  At the moment, the books in my TBR heap would reach the bedroom ceiling twice over if they were gathered into one place.  The books I’m reading for work still get the full treatment, as do most of the books I’m reading for college.  However, if it’s a book that I’ve picked up just because it might be useful, or I liked the sound of the blurb, or it’s had a lot of attention on social media – the rules have changed.  Those books get thirty pages or so to grab my attention.  If by that stage I’m not looking forward to my next opportunity to read a chapter or two, I can choose whether or not to persevere.  As someone pointed out, the early pages of most books have received a disproportionate amount of attention from writers, agents and editors.  That being the case, how likely is it that my reading experience will improve as the book progresses?

Over the last seven days I have started and abandoned two books and returned a third to the library as it was a sequel to one of those two.  I won’t name the books or the authors – it is, after all, just my opinion and it would be unfair of me to cast aspersions on something I didn’t finish.  After all, it could be that my head was just not in the right place to read those stories on that day.  I have to say – seeing my TBR heap shrink as a result is strangely liberating.  Every time I put an unread book in the library returns bag it makes me giggle like a naughty little girl.

Not reading books I didn’t enjoy gave me space to read books that I really did.  East of the Sun, West of the Moon is Jackie Morris’s beautifully illustrated adaptation of a traditional story.  I was going to say it had been a long time since I read the original, but I’m sure you know what I mean.  I haven’t read any other versions of this story for a while so I can’t remember how they end.  I think Ms Morris got it just right.  The girl grew up and changed during her travels and accepted that she was not the same person who had fallen in love with the bear/prince.  Each of the illustrations is a little jewel and I was very sad to give it back to Hampshire libraries.

Vortex by S J Kincaid is the sequel to Insignia. This series has children with processors implanted in their brains competing in games in preparation to defend the world against enemies from beyond.  In reality they are engaged in a constant battle between the mega-rich corporations who control the wealth of the world.  It is full of technology, intrigue, action, politics and teenage friendships and I think I might buy them for my nephew for his 14th birthday – if he doesn’t have them already.

Before July last year I knew nothing about Rainbow Rowell.  Then I went to YALC and saw the rapturous attention she received from her many fans.  I’d been seeing a lot of chatter about her book Eleanor & Park on social media so I decided to read it.  I fell instantly in love with the characters, the story and her writing.  It’s taken me nine months to move another of her books up my reading heap – and it was worth the wait.  Fangirl could, at first glance, be just another story about twin sisters going to University, leaving their bipolar father home alone.  The mother who abandoned them tries to build bridges, there are new friendships, parties, boys and worries over studies.  But this story was written by a master (sorry, mistress) of her craft and has the added bonus of a sub-story; a piece of fanfiction written by the protagonist, Cath.  It was one of those stories that made me sad when the book was over, but happy because I was certain the characters were still carrying on their lives without my watching them.  The library catalogue has two more of her titles listed, but I am being very brave and not placing a reservation at the moment.  Anyone want to take bets on how long I can hold out?

1 thought on “Sunday Snapshot and a Confession”