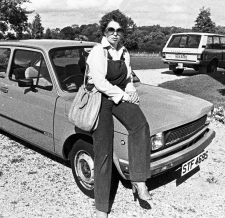 Me, aged around 19, with my second car. It was called Mephistopheles.

This week I have been thinking about how much I enjoy having stories read to me. It happens more often than you might imagine, thanks to audio CDs. I nearly always have a story playing in the car when I drive. A good book makes traffic jams and the tedium of motorways fade into the background.

I have recently been fortunate to attend events where authors have read a piece of writing to the audience. Hearing someone read their own work can be a bit of a mixed blessing. Some authors get anxious standing up in public and their presentation can be stilted and uncomfortable; some are such performers that their story becomes overwhelmed by the personality of the reader; sometimes, if you are very lucky, the strength of the story pushes the reader totally out of the picture. On those occasions the only voices you hear are those of the characters and the only pictures are the settings in which the story takes place.

There is a big difference between someone who reads a story to an audience and someone who is a storyteller. Storytellers seldom have a book in front of them. They are engaged with the audience, not with a printed page. They don’t just use their voices, they use their whole body (and sometimes props, costume and musical instruments) to bring a story to life. They interact with their listeners, adapting and fine-tuning their performance in response to the reactions of the audience. They are exciting and alluring and, like so many things, at their best when observed in a live performance. Somehow an audio or video recording of their storytelling feels flat in comparison. 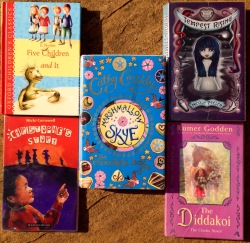 In Christophe’s Story we meet a Rwandan refugee struggling with a new language, a new school and a new country.  He misses his grandfather, who taught him that stories should never be written down as they lose their potency.  Christophe is not accepted by some of his classmates, so his teacher encourages him to share his story with them and, later, with the whole school.  This book covers some very difficult themes, including bullying and murder, but it is a touching, gently told story.

The Diddakoi has some similar themes.  Kizzy is new to the school and comes from a very different background to the other pupils.  Her family are travellers and she lives with her great-great-grandmother.  She is bullied by the girls at school and her problems increase when Gran dies.  I loved this book and cried buckets when Kizzy’s horse, Joe, died in his paddock.  Kizzy’s issues with the school bullies and her home situation are resolved in a thoughtful and touching way.  The story ends happily – cue more sobbing from me.  (Sorry for the spoilers).

I don’t remember reading Five Children and It as a child.  I know they made a television programme (series?) based on it, but I don’t really remember that either.  I’ve had Five Children on the Western Front in my TBR heap for a while but felt I should read the original story first.  I can’t say I especially enjoyed it, but I didn’t hate it either.  It was written in 1902 and some of the language was difficult – they were talking about modes of transport and ways of living that I am not familiar with.  I didn’t warm towards any of the children and thought the Psammead was very tolerant of their rude and selfish behaviour.  Some of the adventures were quite good fun and I did enjoy the way the wishes worked out.

After hearing Cathy Cassidy speak at the SCBWI conference I decided to read some of her writing.  I enjoyed Shine on Daizy Star (a book group read) and absolutely loved Cherry Crush, the first book in The Chocolate Box Girls series, so I was excited to read the second instalment, Marshmallow Skye.  I did like it, but it was not nearly as good as the first book.  I felt that I was being prepared for Summer’s story more than being told Skye’s.  It was an unsatisfying mix of sequel and prequel.

The final book this week is Tempest Rising which I read for my Sci-Fi and Fantasy book group.  I found it difficult to get to grips with this story at first and I think that is because I was mislead by the cover.  At first glance it looks like a book for children and I started to read, thinking it might be intended as a young YA book.  In the first few chapters the protagonist was revealed to be a 26-year-old woman who worked in a bookshop and took care of her ailing father.  She likes to swim in the sea, in the nude and one of her employers buys her sexy lingerie, sex toys and rude books as birthday and Christmas gifts.  Once I’d got my head around that, the fact that her mother was a Selkie and that she started to have an affair with a vampire seemed quite reasonable.  At times the story did seem to be more YA than adult fiction, but there are some very steamy pages in amongst murder, intrigue and a whole court of mythological beings.  I still don’t quite know how I feel about this book, so I have requested the second in the series to help me find out.  I think the adventures of Jane True could turn into a guilty pleasure.